Meet the newest addition to the Bodyboard-Holidays team, Matt Davies. 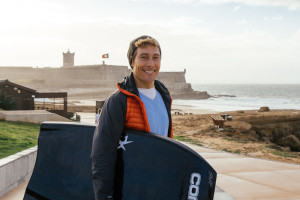 1. What brought you to Portugal?

Some years ago I was living in Hossegor, France when I met a Portuguese fisherman and bodyboarder from an area just West of Lisbon. He described an untapped coastline often overlooked by European surfers that boasted an incredible array of bodyboarding waves. Added to this was the 250 days of annual sunshine, the lure of sunkist Latin women, the prospect of eating out for less than 5 Euros and a place where the wine flows like water. Fit for a new adventure and sold on such irresistible promises I jumped on the next flight to Lisbon. Eight years on and many of these tales still hold true.

2. How are the waves in Portugal? And which are your favourite spots?

In a word, well three words, they are consistent, varied and epic for bodyboarding! The coastline of the Lisbon area is L-shaped and so is blessed with two coastlines; this means offshore waves in virtually all conditions. When it is too big on the West coast you can find sheltered spots on the Southern coast, and when too small on the South coast we head out West. This corner of Portugal is also unique in that it has waves for every preference from punchy beach breaks, long pointbreaks, to hollow shorebreaks, wedges, reefs and heaving slabs. What’s more, we are just 1h30mins from the holy lands of Supertubos and Nazare.

In terms of my favourite waves I froth on surfing Carcavelos, Praia Grande, Adraga, Ericeira, Supertubos and Nazare (See our ‘Top 5 beachie’ blog for further information). In addition to these I have a number of secret spots up my sleeve that I couldn’t possibly print on here, but am happy to share with the BBhol crew …blindfolded. 🙂

3. What do you enjoy most about living in Portugal?

Of course the great waves and endless sunshine top this list, but this forgotten corner of Europe offers much more. Compared to the rest of Europe, Portugal still has a relatively low cost of living which means you can regularly eat out guilt free. And as the fisherman said, the wine flows like water, you can buy a good bottle of wine for less than 3 Euro. I have also come accustomed to the café culture and enjoy kicking back in the sun after a surf and watching the world go by (I probably spend most of my time doing this) but at 60 cents for an expresso it’s not a dangerously expensive habit.

Portugal is also steeped in history and culture and fortunately, so many local traditions such as vibrant village festivals, fetes, parades and local artisan markets have been kept alive. This coupled with a nation of super friendly people with a laid back, I’ll do it tomorrow demeanour makes you feel like you’re in South America yet you’re just 2 hours from London.

Booming! Second to Australia or Brazil, there is no other nation that likes bodyboarding as much as the Portuguese. What’s more, there is no animosity between surfers and bodyboarders like you see in so many other countries, both have mutual respect for one another and just wish to charge good waves.

Since arriving in 2007, Portuguese bodyboarders have really raised their game and are surfing as well as any other nation. The likes of Antonio Cardoso are continually pushing the limits in Portugal’s most critical waves and turning heads on the world tour.

It comes as no coincidence that Pierre Louis Costes recently chose to adopt this bodyboarding friendly nation as his new home.

Due to the nature of this coastline and consistency of the Atlantic Ocean, flat days are few and far between. However, when the opportunity arises to give my fin cuts a rest, I enjoy hitting the trails and running in the local mountains. I also like to compliment my bodyboarding and running with a bit of yoga (fortunately my girlfriend is a yoga teacher). When I am not feeling so energetic I like nothing more than pottering around in my organic small holding.