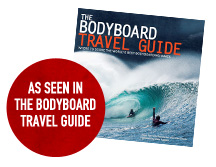 Technically the meandering tail of North America, Central America forms part of the tropical isthmus to South America flanked by both the Pacific Ocean and the Caribbean Sea. Lush, rich and fertile, the landscape is mountainous and geologically active, with several active volcanoes grumbling away deep in the forests.

The twisty and diverse coastlines receive swell from both sides and boast every conceivable break a bodyboarder could wish for, in warm water, without the crowds of the more well-known locations. From the dream wedges and beachies of Nicaragua to the sick reefs and shories of Costa Rica and Panama, the region is a veritable hotbed of bodyboarding waves just waiting to be discovered and lapped up.

The multi-directional dual coastlines of the region mean there an incredible number of epic spots to be found. These breaks are serviced by the super-consistent Pacific Ocean swells which batter the west coast, and the seasonal yet punchy east Caribbean Sea swell which gives some of the most fun waves in the whole hemisphere.

Despite a boom in surf travellers over the last few decades in countries like Mexico and Costa Rica, other nations in the region are comparatively new to the game and packed full of virgin secrets to be dug up – no doubt breaking pristinely in front of some wild green jungle filled with monkeys, parrots and jaguars.

There are a great many dangers when travelling throughout Central America including wild animals, jungle insects and nasty diseases, which are all ever-present due to the tropical and sub-tropical climates and all the joys that brings. Make sure you get the requisite jabs and medicines you need if you are entering areas of known diseases, which can include malaria, cholera, rabies, hepatitis, typhoid, dengue fever and yellow fever. Check for outbreaks before travelling and make sure you are covered.

Most of the countries in Central America speak Spanish, so if you don’t know any it is wise to learn some basic phrases to help make your trip that bit easier. Although English is spoken in some countries, it can’t hurt to learn a bit of the local lingo –even if the person you are speaking to only knows broken English and you keyworded Spanish, you’re at least halfway there in coming to an understanding.

Other unfortunate possibilities in Central America are crime, theft and armed attacks. Widespread poverty and social imbalance contributes more to this than anything, although gang violence in larger urban areas is not uncommon. Nor, for that matter, is the drug trade, which runs through Central America like its mountain ranges.

Many of the countries in Central America have had a volatile and violent history of social and civil unrest, and those legacies are still felt today to a degree. Having the sense to not be showy of expensive goods when out and about, keeping your bags locked and moving on swiftly through bad neighbourhoods should improve your chances of a trouble-free trip. Oh, and travel insurance!

Bodyboarding is big in the more recognised pockets of Central America, and the standard of riding is as solid as the waves they have here on tap. As you delve off the beaten track further into the twisty region you will find small groups of bodyboarders busting out, but it is still a growing sport. Be sure to meet the local boogers, be generous and you will be welcomed – and you never know, they may even give you a heads up to a sick secret setup somewhere in the jungle.

Take a look at upcoming Bodyboard Trips to Costa Rica and Nicaragua.