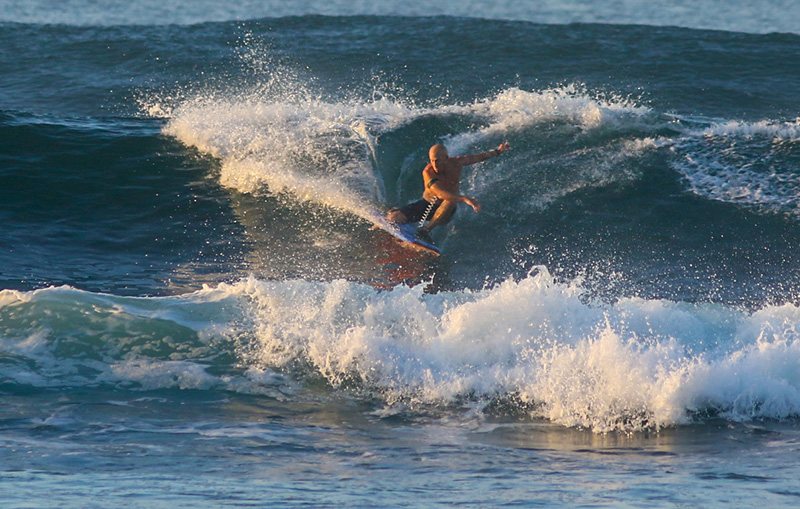 Our 2020 El Salvador trip will go down as one of the best ever. The waves pumped, celebrity trip leaders Jay and Vicki Reale were on fine form. It was a great crew of riders of all ages and abilities from each corner of the world. We enjoyed the pumping wedges and dawn offshores for 10 days straight.

By day 2 it was clear though, that there was an internal power struggle going on within the group. It just so happened that among this crew there was a selection of solid Drop Knee riders. The daily footage review sessions were soon looking like a scene from Fu-Manchu.

Jay Reale was delivering time less carves, hacks and reverses. Russell ‘Rusty’ Morrison was laying down some solid rail for western Australia. Hawaii was represented by Keith Fisher. Peru’s DK rep was Juan Minuta, Vicki Reale was getting stuck in representing Australia’s east coast and last of all was Bodyboard-Holidays own Rob Barber from the UK.

The guys locked horns in a daily DK War. You can see some of the results in the shots. The bar was raised and the crew loved the daily challenge. Competition drives the performance level up and soon the guys wanted to know how Jay was nailing such tight, stylish turns and throwing such huge chunks of water on his forehand snap. During the video analysis session one day we dove deep on this subject, scrutinizing Jay for the secret sauce to nailing his turns. The story goes like this; “In my early years as a pro bodyboarder I lived in California and shared a flat with Keith Sasaki. We surfed together all the time and he used to say that I drop knee’d like a robot!” laughed Jay.

“It made me really focus on my style so I looked closely at what Keith does with his arms when he is pulling a forehand snap or carve. I soon learned that Keith did the same, but he watched other riders and his focus was specifically on the surfer Tom Curren”

The guys were tearing all week and it was brilliant to see the performance level go up a notch. Learning the secrets of Jay and Keith’s DK styles was a rare, vintage bodyboarding nugget of info. There was a tangible shift in the arm movement of the crew during their turns and that time less style, initiated by King Curren of the surfing world was shared out to the crew in El Salvador.

We can’t wait too do it all again next year. Jay and Vicki are confirmed for Jan/Feb 2021, if you’d like to be a part of these magical bodyboarding moments then grab your place on our next El Salvador bodyboard trip!