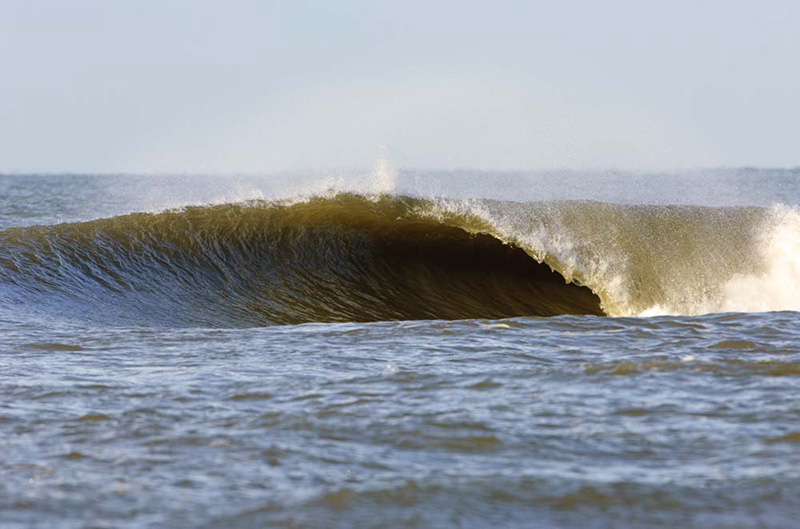 If there were a bucket list of surf spots in the UK, Croyde Bay would definitely be in the top three. We’re heading to North Devon this October, the optimum swell season, for a 48hour bodyboard immersion mission to score the infamous low-tide barrels at the UK’s sickest beach break.

We caught up with our man on the ground in North Devon, and avid bodyboarder, Dion Hunt for an insight into this boogers’ paradise.

1. What is the best thing about being a bodyboarder in North Devon?

I’m so lucky to live in a part of North Devon where we have such a number of sick beaches with different breaks to ride depending on tide / swell pattern. We are blessed in North Devon with perfect point breaks and hollow low-tide pits. There is just a hand full of bodyboarders compared to stand up surfers here, but together we all share the waves. Gone are the bad days when locals ruled the peaks at lowtide Croyde, I guess we all just grew up!

Beaches
Croyde Bay: – Endless pits and A-frames a plenty from low-tide though to mid tide and beyond.
The Point – An epic point break throwing sick rights longer than a ride at Thorpe park …”tickets please!”
Putsborough AKA Pland – A beautiful beach with sheltered waves when other beaches are blown out. Pland works best at mid-tide, two hours after the dropping tide.
Woolacombe – A long, fun beach break working from low-tide all the way though, can get busy in the Summer.
Combesgate – A little gem! Works from low-tide to mid-tide on the push, then it’s time to get out – watch out for the rocks.
Lynmouth – When it’s working, need I say any more… ?
Saunton – If longboarding is your thing this is the place for you.


2. What is your favourite spot and why?

Croyde Croyde and Croyde, it’s hard to find another beach break that’s as good as Croyde on its day, when it’s good it’s really damn good! The low-tide banks are epic on their day, if you have ever ridden here before, you will know it’s as good as anywhere in the world.

3. Can you describe your most memorable session in North Devon?

It was a cold February afternoon, the winds had turned off shore and the swell was pumping, Pland was the only beach that had enough shelter to hold the swell and deal with the wind, I’d been in the ocean about 45 minutes and the swell just kept getting bigger and bigger as the tide pushed in. As I looked around, I realised the once crew of 20 had significantly thinned to just a hand full of guys who knew this was one of those special days you’d not forget it in a hurry. Being the only bodyboarder out, I either earned respect, or was I just some crazy guy falling down the face of a wave on a sled, but it still gets mentioned in the pub about that crazy bodyboarder on that day in February. And that’s why it’s the day I will always remember.

4. When the swell is running and there are good winds, can you describe a typical day in north Devon for you?

If the surf report is looking good, life’s just a bowl of cherries in North Devon with its laidback beach lifestyle and breathtaking backdrop. We hook up at the local beach before work and score waves as the off shore breeze dances over the dunes and kisses the waves. As you look around, you ask yourself ‘this is heaven right?’… With just a short drive to work you grab a coffee en route and wax euphorically about how good it was.

5. What type of waves can bodyboarding visitors to north Devon expect?

There is everything from low-tide banks to get pitted, to point breaks that will blow you away. From beginner to pro, North Devon has something for everyone, it’s one of those places that once you’ve visited you will be back for more.

6. Who are the north Devon bodyboarders to look out for?

We don’t see many bodyboarders up here… It’s a forgotten gem waiting to be found!

7. When you’re out of the water, where is the best place to grab some food, a pint and to generally hang out and chill?

There’s plenty of places to grab a pint around North Devon. There’s the Thatch in Croyde, where you’ll find a buzzing vibe with live music and great food. Or if you like having your pint overlooking the Ocean then head to the Red Barn at Wooly, it’s always a nice place to chill with mates after a session at Combesgate.

If Dion’s synopsise hasn’t got you chomping at the bit already, let us tell you a little more about this bucklist bodyboarding trip.

Our aim at Bodyboard Holidays this October is to offer a full bodyboarding immersion around North Devon, with 3 surf sessions, photo and video analysis, expert coaching by a team of enthusiastic and accomplished bodyboarders in waves made for booging. So whether you’re an experienced rider or novice to the sport, you will definitely go home a better booger having been to North Devon. Full Information Here